Perhaps it was the lunar eclipse, but it appears that Winter Solstice received far more mainstream attention this year than usual.  Or maybe I’m just getting so immersed in my own world that it seems that way.  I suspect both are true.

In response to this increased interest, I’d like to embellish our understanding of the energetics of the annual cycle, of which Winter Solstice is just a part.  The Chinese perspective of these events is an integral part of their perception of the universe, and it is a reflection of all other cycles of time — a day, a life, and other cycles much grander than human beings generally recognize. Understanding the nature of these flows offers quite an advantage to the soul traversing the planes of matter, energy, space, and time.

From the Oriental worldview, yin and yang are the most primary elements of the physical universe. The most widely recognized symbol of Chinese culture is the Tai Qi, that universally lyrical representation of balance. It portrays, in black and white, the interplay of yin and yang, yin within yang, yang within yin, and suggests the infinite shades of grey they share.  Volumes have been written to explain these icons of duality. Every ‘thing’ in the universe owes its existence to its opposite: day, night; love, hate; hot, cold, etc.

While it’s true that yin and yang are opposites, more importantly, they are complements of each other. Yet more enigmatic to westerners is the concept that yin and yang continually shift, metamorphose, and transform into one another.

At the most basic level, yin is female, dark, cool, moist, embracing, substantial, and nurturing. Yang is male, light, warm, dry, forceful, energetic, and creative. Their interplay reaches unimaginable depths, but you get the picture.

To assist in grasping the annual cycle of yin / yang’s dance, I’ve provided a graphical portrayal of its flow, which is simultaneously linear and circular. Ultimately, the cycle becomes an angled spiral, but that’s deeper than we need to go here. 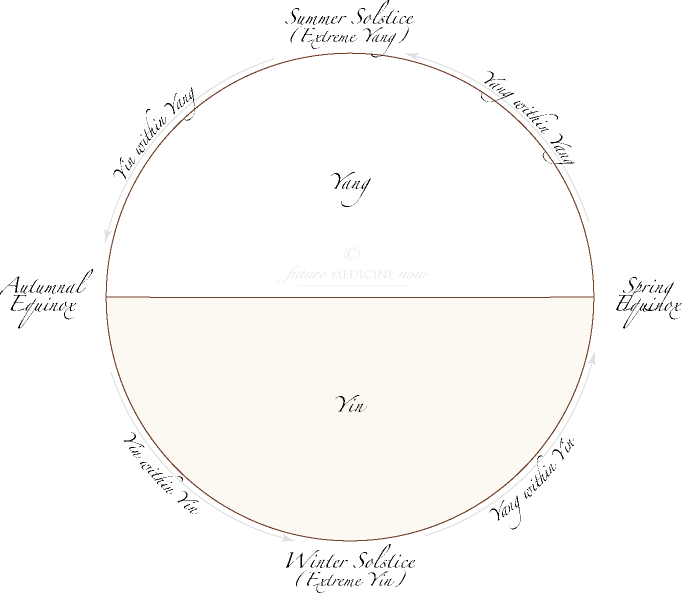 Since we just passed through the shift of Winter Solstice, let’s begin our journey where we are — at the bottom of the diagram. You’ll notice that the bottom half of the circle is Yin.  We are currently at the bottom, the middle of the Yin half of the year.

The solstice took place this year in New Mexico at 4:38 PM last Tuesday, the 21st of December. Without the benefit of technology, however, humans would do well to pinpoint the day. The sun’s apparent trajectory to the south has become so slow by the time solstice arrives that its ‘movement’ is nearly imperceptible. In fact, the people who have inhabited this part of the earth for thousands of years regard it as having stopped.

Regardless of our perception of the precise moment, all people of the world who are aware of their place in these cycles are keenly conscious of this time on the planet. In the northern hemisphere, we have just experienced what is known as ‘extreme yin’ in the Oriental paradigm of existence. It is cold. It is predominantly dark — the days will never be shorter than last Tuesday. If they are, it will indeed, be a cold day in hell!

The plant kingdom has experienced a slow descent into ever deeper death, which is the ultimate yin. It is a time to slow down, reflect on our creations of the year, to draw inward and conserve our energy. As a culture, few of us make these choices, but to those who are paying attention, nature makes it abundantly clear that this is the most appropriate way to profit from planetary energies of the moment.

As we, as individuals, enter the autumn of our lives, we begin to see the wisdom of remaining in alignment with such cosmic suggestions.

So why, if this time is such a cold and dreary reflection of death, have cultures always celebrated this time of year? Because of the dramatic shift which now occurs. At this moment, Yang makes a subtle, yet earth changing, appearance.

Notwithstanding the slow-as-molasses movement of the sun, regardless of the most desolate moments of the year — in fact, because of these realities — everything is about to change. We’ve reached the bottom of the circle. We can’t descend any lower. We have reached Extreme Yin. And when that happens, Yang makes its appearance. At the moment of Winter Solstice, we take a gentle, but distinct step into ‘Yang within Yin’. If we’re watching, we can see it happen in our daily lives.

It will be some time before we notice that the days are indeed getting longer, but with a little observation, we can perceive this momentous shift when it happens. Experience changes. The irrepressible downward pull releases its grip and subtle relief is felt.  This is why New Year’s Eve is such a wild time for many people — it’s already been eleven days since the real new year, and even the drowsy ones are starting to notice.

So it’s a happy season. It’s a time of rebirth, reawakening, ascension, and slowly accumulating momentum — a time to look upward. Out of the deep reflection prior to solstice is now birthed new visions, inspiration, resolve to create new realities for ourselves.

But it’s still winter, right? Still Yin. Soon, we’re back in the humdrum. We may even experience a backlash of depression after all the festivities. Yet the ascending yang is irrepressible. Within a few weeks, we notice the days are definitely getting longer, and our lives are picking up a clip that wasn’t sustainable before Christmas. Often this intensity isn’t really noticed until Spring Equinox begins to draw near.

For me, Spring Equinox is the most intense—or maybe I should say, exhausting — shift of energy in the earth’s circumnavigation of the sun.  I liken it to being at the tip of a rocket headed for outer space. The acceleration is almost imperceptible at liftoff (Winter Solstice). Then the Gs start to build. And build. And BUILD. Shortly before equinox, I feel like a rubber band that’s about to snap. Energetics of the planet are shifting on an upward trajectory with such speed that I’m often just hanging on.

No moment of the year could be more polar opposite to having taken one’s last step out of ‘Yin within Yin’ than Spring Equinox—the moment we step into ‘Yang within Yang’. It is a radical time. Yes, it’s exciting.  Yes, the mind loves the movement, the speed of change and expansion. The increase of light and warmth. The onrush of creative opportunity.

But those of you who are familiar with Oriental Medicine know that the season surrounding March 21st is ‘liver’ time. The winds of spring compound the terrific rush of shifting energy, all of which is highly stressful to the liver, which is charged with the oversight of smoothly flowing Qi throughout the other organs (see An Image of Liver Qi). Rising Yang is destabilizing to liver function any time of year, but especially in the spring.

Typically, when subjected to modern culture during Spring Equinox our livers are stressed to the max, and everyone benefits from well-guided rebalancing at this major shift in the earth’s seasons — just as we need appropriate tonification during our swing through the Yin time of year.

If we receive correct treatment at these turning points, and if we have held steady to the power which guides us and the relentless focus of its intent, we are rewarded with a sublime release of pressure as we cross the deafening frontier of equinox into weightlessness, escaping Yin’s gravitational pull, to sail freely on our way to the year’s apex at Summer Solstice.