The stillness is so deep now, it’s deafening.

Except for the frogs.

It’s rained some since the last post. Very short, but full rains — enough that we switched back to the rainwater system four days after I returned home from a road trip to Seattle. The system is now purged of well water. And quite a bit more.

Last Saturday, it was brought to my attention that one and perhaps two of our downspouts were plugged. Somewhere. So, not having any galas to attend, I went to work to figure it out. We can’t afford to be missing a downspout that drains nearly a quarter of the roof.

There is a point in every chela’s life when the karma burnoff is just relentless. In fact, calling this phenomenon a ‘point’ is somewhat of a misnomer. It can last quite awhile — as in, years. I’ve grown accustomed to this level of purification — but, oddly, the gifts that accompany this surrender are always unanticipated. So it was no surprise that this project turned into a three day affair. I won’t bore you with the details, but another interesting feature of life on this Path is that once we just jump in to that task we knew was going to take days, we nearly always discover that it’s over and done with in a laughingly short period of time.

So it was today. On investigating the worst downspout, I had discovered a host of related issues that needed resolving. One of them took an entire day, with Sue helping. (It had a lovely outcome.) But I had convinced myself that fixing the original downspout problem was going to require digging up twenty feet of drainage pipe. This morning I started.

The problem was solved by liberating only four feet of pipe. Having actually fixed the problem in about 30 seconds, getting everything back together took quite a bit of time and effort. Promising/threatening clouds were building all morning, directly overhead. Between the obvious depth of the clouds overhead, the thunder, and the lightning, it was hard to believe it had not yet rained. The noise factor had Scampi quivering against my leg. This went on for hours.

Finally the job was done, tools were clean, everything was back where it belonged, and the system was fully functional. I sensed it was time to go inside. The storm was the most intense I have witnessed in this house in fifteen years — more so than the hailstorm last October which took out four of our five skylights, one 4×5 feet. In less than an hour, the storm put 2000 gallons of luscious rainwater in our tanks. We’re now over 5000 gallons and filling.

But the storm took its toll. Massive amounts of water coming out of the sky, mostly at a 45˚ angle, produced an incessant din far more coarse than the sounds I’m normally drawn to. For most of its duration it did not let up, and on occasion would actually intensify. Each time this happened, it produced a numbing sense of disbelief that it could actually attain greater intensity than it had already displayed. 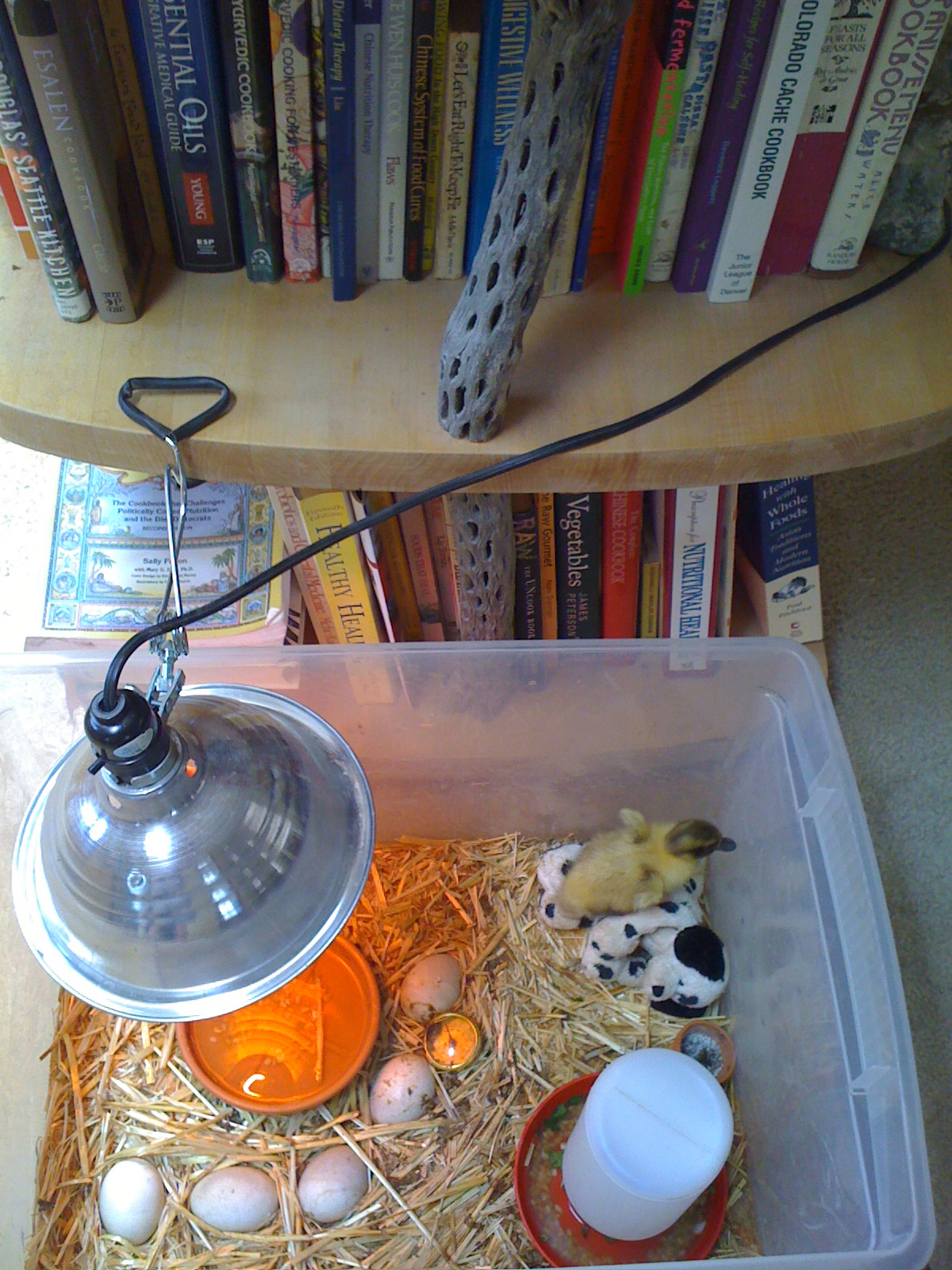 With the exception of a two week old duckling (Meatball) living in the kitchen, all of our birds were out free-ranging in this. The Gang of Four — a tightly knit band of renegade, teenage chicks — had hauled ass into the other chickens’ coop and were well protected. The two Wyandotte laying hens I assumed were under the deck, as usual, with the Two Twerps and the Ballerina. And the duck and her drake were standing out in the middle of it all, yucking it up — until it began to hail.

Those with experience with hailstorms know and respect the lessening of a storm when hail is forming. This is when violent updrafts are actually forcing rain up into elevations where it freezes before being allowed to fall again. These updrafts can repeat themselves, forcing the small hail back up with more moisture and more freezing. The result is increasing size of the hailstones. Anyone who knows this recognizes these sudden pauses in the storm at ground level as an ominous respite. The more times it happens, the larger the hail.

Today, in the last quarter of the storm, this happened repeatedly. And hail did come. And each time it came, it blasted into the house with astounding ferocity. Still a little raw from October’s storm, I cringed every time the silence came again. Only someone who has actually experienced the aforementioned period of non-stop karma orchestrated by a true Master, also knows the unbelievable love with which it is administered. Yet the mind has difficulty accepting this grace.

Somehow, the hail never reached more than the size of a pea. Nonetheless, the ducks had taken shelter under the overhang of nesting boxes at the end of the chicken coop. But the next time I looked they were nowhere in sight. Some other potential disasters were beginning to manifest out there as well. I decided it was time to go out to the garage, put on my climbing helmet and my Ice Nine jacket, find out where the ducks were and take care of other business. In doing so, I was met with an astounding, full on rainbow in our driveway, thirty feet from me. I know how rainbows happen, but I’ve never seen anything like this. 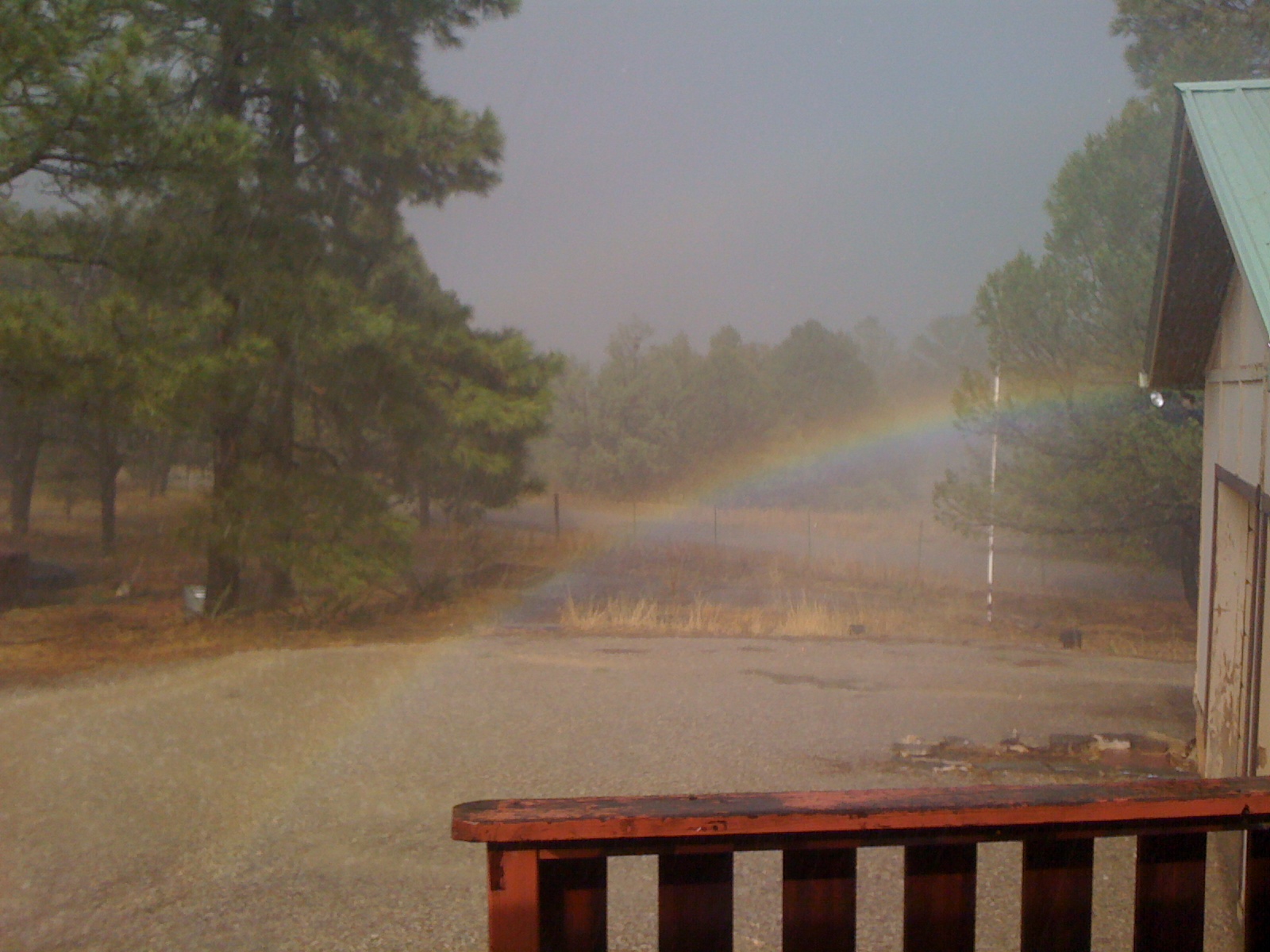 By the time I got to the garage, the storm showed signs of moving on. The pauses were now real. It wasn’t going to be necessary to go out and flounder in the fury. In a remarkably short time the sky lightened, the rain stopped, the landscape filled with ecstatic birds of all size and color racing about in delight. Huge pools of water were everywhere. What was supposed to be the garden was submerged. And there were lots of things needing attention.

As I worked I slowly became aware of a growing background noise. The wind was still blowing, yet a faintly familiar sound gently tapped on my shoulder for my attention until I recognized it. Every few years, when a noteworthy storm comes through, enough water drains into my neighbor’s normally dry pond, and a miraculous, joyful event transpires. Hundreds of dormant frogs come suddenly alive and begin singing a song so sweet and soothing that it erases the violence of the storm which made it possible. These frogs sing only rarely more than one night every few years.

For those fortunate souls who have heard the heart-melting evening voice of frogs in divine desert canyons, such as the sacred recesses of Coyote Gulch, our local choir is magnified a hundredfold.

Tonight the frogs are saran-aiding the Rainbird.