Four years ago, when our naiveté surpassed the capacity of New Mexico’s high country (even a relatively moist portion of it) to support our agrarian ambitions, I built a pasture pen, and Sue ordered twenty-five heritage breed chicks who would inhabit the pen. We already had a coop for a number of other breeds of chicken, happily laying colorful, delicious eggs and ranging about our property.

A pasture pen, or chicken tractor, is a relatively new development in the alternative farming world—based on the principle of moving a largish number of chickens methodically over a piece of land to the benefit of the chickens’ health, as well as that of the land. The pen is a low, secure framework that can be dragged from its current position to the next destination (usually adjacent), making a new patch of greenery, bugs, and worms available to the eager chickens, and leaving to recover, a square of thoroughly cropped and scratched, but well fertilized soil. 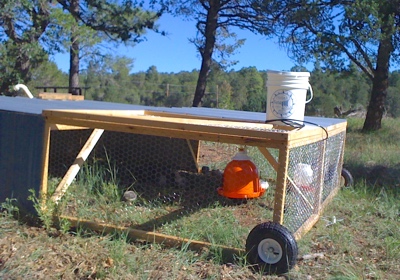 Given our relatively rough ‘pasture’, our pen sported wheels at all four corners. Half of the pen is roofed and walled with metal roofing to protect from weather, and generally oriented to offer respite from cold nights and the wind, which can be fierce. The other half is just chicken wire, offering plenty of sunshine for the chickens. A large water dispenser is suspended from the low roof.

Construction of such a shelter must balance protection and structural strength with the ability to be moved at least daily by one person. Moving ours, even with wheels, was a two-person job—and not just because its construction erred on the side of weight.

Life loves life—from microbes to humans, to well-cared-for farm animals. And loving life includes the love of freedom. Inquisitive and healthy chicks are a rambunctious lot. 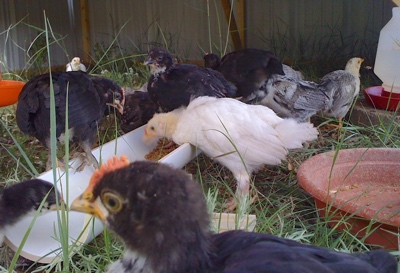 The grass is always greener on the other side of the fence, sometimes both subjectively and objectively. Wrestling the cantankerous pen into it’s new position often required all of one’s strength and attention to accomplish, and eager chicks sense an opportunity to find weaknesses in the barrier to the other side of the ‘fence’. That eagerness can result in injury or even the death of a chick. This is why we preferred making the pen move a two person job.

One (usually me) puts strength into surmounting the obstacles impeding the move, maintaining as much peripheral awareness as possible. The other watches the chicks closely to avoid accidents. Most often I literally could not actually see all the chicks at such a moment. Ironically, most of the two or three accidents we experienced occurred when the two of us were present. And this challenge did not diminish with maturation of the chickens. If anything, their desire increased—as well as their ingenuity.

Three of those chickens survived the pasture pen that year, and are alive today, enjoying a well-earned, advanced age, in with the other chickens in our coop. This story is about one who didn’t.

Of those who had an unfortunate encounter with the pasture pen, a white Dorking was among the early ones. She suffered an injury and we put her in the ‘broody palace’ to mend. When one speaks of a white chicken, a pure, stunning, and brilliant white is rarely what’s being described. There’s usually a tint of yellow or some other generally unnoticed feature detracting from pure white, not to mention the continual presence of dirt in a chicken’s life. This chicken was always pure, dazzling, blinding white—with a personality to match.

In her convalescence, she quickly exhibited unusual qualities for a chicken. She genuinely liked us, and was not at all intimidated by our presence or our touch. In fact, she soon became so excited by our appearance that, by the time she had recovered, she would come running headlong to us when we came into the yard. The image was impossible to ignore. She vividly portrayed the ravenous paramour, aching with desire for her beloved, dashing madly into his arms as if he were breath itself. The effect was heightened by brilliant breast feathers arranged in such a way that suggested the wind blowing them gloriously aside by the speed of her rush toward you. The response to such rash abandon was irresistible. I always regret that we never got a picture or video that adequately portrayed the reality of that event. This bird in motion was an exhilarating sight to behold.

Those of you with chickens know that a chicken running is one of the most amusing sights on the farm. There was nothing remotely funny about this chicken running.

Grace, the only name worthy of her, had a remarkable presence among the other chickens, as well. Even as an adolescent, she never played the underling. She chose to make her own entry into the coop one evening, marching cautiously, yet unhesitatingly, up the ramp into the enclosed sleeping quarters where haughty, self-protective old hens, adorned in their hard-won pecking order, waited to see what audacious outsider would dare come through their door. Her self-confidence and boldness were sufficient to avoid attacks from a petty hierarchy. The coop was calm. And soon exuded an unprecedented level of consciousness.

It was a happy time for weeks, until the unanticipated day came when something shifted. Grace crowed right in Sue’s face. Grace is a rooster. 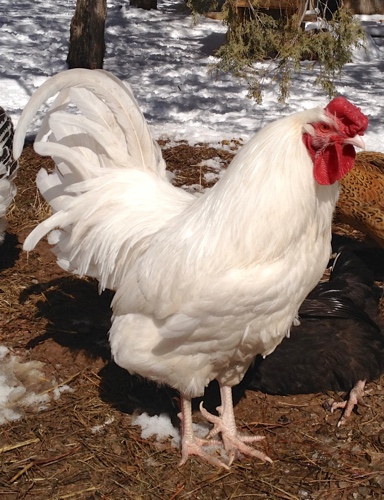 Sue and I were both stunned. Many of Grace’s siblings, still approaching full maturity in the pasture pen, had already announced their masculinity, but we were not prepared for this. Even after ‘her’ sex was clear, Grace remained a female to me, and does to this day. She kept her name. She kept her love for us. She continued to exhibit an advanced level of consciousness. She kept an impressive level of harmony in her flock, escorting her hens in an orderly fashion around the property. She continued to make clear that our appearance made her day, and that she was very attached to us.

She was still Grace to me. Still dazzling to observe, stunning to behold. Still a gift to our lives here. Testosterone was her undoing. Her insatiable desire for sex was eventually, literally killing her favorite hens.

Taking the life of a chicken, or for that matter, of any creature, is a very difficult thing to do. At best, it is a deeply contemplated spiritual exercise, requiring surrender, tempered with focused, compassionate intention. With Grace, there was more, of course. I still feel it. And I won’t try to give it more form here, because the attempt would simply be a hollow insult to the reality.

Grace’s magnificent body, shrouded in a Ziploc, somehow escaped my attention in the ensuing years of opening the freezer. In the meantime, other birds fed us in a wonderful way, but finally, about a year ago, Grace fed us for the last time. Almost.

Last night, overdue for a shopping trip, I searched through some frozen packages of chicken offal for my morning protein. I came across one labeled “Grace 3-20-12”. I set it and a couple of others in the kitchen sink to thaw overnight.

As I prepared breakfast, I opened the thawed packages. Most were similar, some livers and some hearts. There was no mistake which ones belonged to Grace—especially the heart.

In Oriental medicine, Heart is the Emperor, the central organ, and its ‘protector’ is the Pericardium, a valuable membrane of such importance as to have its own channel and system of function, an interesting variation of the Heart. I’ve never noticed a chicken’s pericardium until I cut into Grace’s heart. As in Oriental medicine, it stood apart on its own, dutifully surrounding the precious heart, yet very much still its own entity. The membrane was as stout, capable, and noteworthy as her robust heart.

The breakfast was deeply satisfying. Fresh green beans, onions, garlic, turnip, shiitake, celery, with garlic red pepper miso, olive oil, and sea salt, anchored by the heart and liver once enlivened by a remarkable soul and surrounded by those of a few of her compatriots. 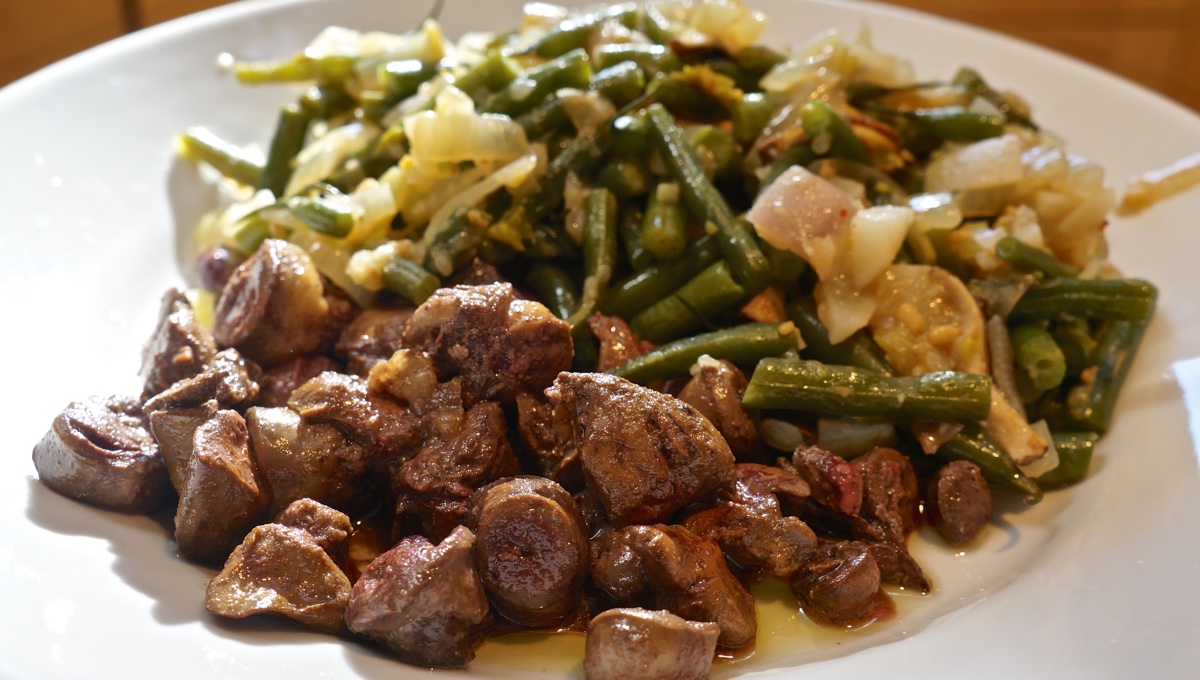 Breakfast like an Emperor. Provided by an Emperor. You fed us so many times, Grace, in so many ways! And your memory still surpasses any banquet.