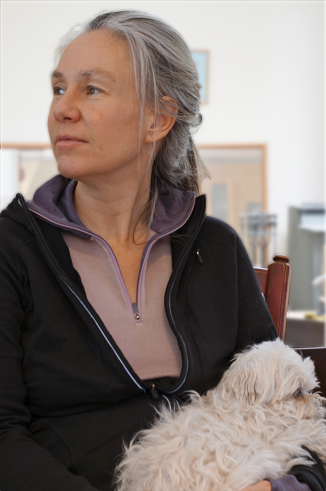 Sue and Scamp and I had a divinely quiet, uncomplicated, thanksgiving at home. While I was fixing our breakfast of hot, succulent duck, waiting in its Römertopf, and spinach (one bunch each) steamed to a brilliant green in ghee and duck juice — with a handful of frosty arugula from the cold frame — I got an unexpected flash for a tart, as two of the season’s last Comice pears (the pear of pears) gazed wistfully at me from the countertop.

If we had cute little tart dishes/pans, that’s what I’d have used, but we don’t, so I used a shallow little 9″ brown glass pie plate instead. Sue lovingly agreed to make a half crust recipe from the Esalen Cookbook

, marveling again at how easy it is to make a great crust. Then, much later in the day, I got to play with the fun part.

The groundwork for the inspiration was laid in brief flashes a couple of days prior, thinking about my fondness for pecans and pies made with them — although I eat pie a grand total of maybe twice a year. And also wondering, what were the ingredients of that suspicious looking filling between the pecans in most pies? Whatever it is, I knew I probably didn’t want to eat it. In the meantime, the Master had been assembling the ingredients and the backdrop to create something altogether different when it came time to give me the inspiration.

Using ingredients already in the house, here’s how it came down. Into a bowl entirely too large for the meager filling, but giving me lots of room to play, I poured a splash of Cassis — probably 3 tablespoons. I didn’t measure anything. Wait. That’s not true. I measure everything very precisely — I just don’t use kitchen utensils or numbers.

Zero
Is where the Real Fun starts.
There’s too much counting
Everywhere else!
— Hafiz 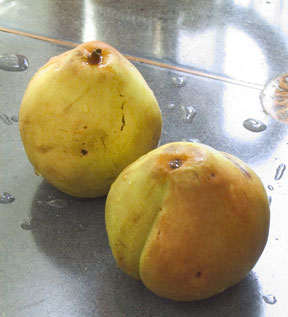 Into the Cassis, I added several paper thin slices of ginger, minced, and some grated lemon zest. Then I minced a couple of dried, but moist, Turkish Calimyrna figs to join the Cassis party. Coring pears is one of my favorite things to do with a sharp knife, and that’s what I did next, slicing them thinly, skin included. If you don’t know Comice pears, the subtle, yet dazzling star of our show, it may be because of their very short season and seemingly limited supply. This year was extremely short, at least at La Montanita Food Co-op. They usually arrive around Thanksgiving, and when you’re fortunate enough to plunge into their juicy depths, your eyes are likely to roll back in your head as you think, “OmiGod! This is how pears are supposed to taste!!” They really don’t need a friggin’ pie! 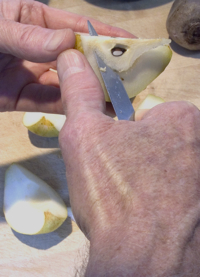 But we’re just having fun with the flash, right? So I threw in a half teaspoon of whole wheat pastry flour, and then another one. That oughta be enough. Dash of cinnamon and blended it all with a spoonula.

Got another, smaller bowl for the topping, and poured in what must have been about two cups of pecan pieces. After all, pecans were the original inspiration, remember? On top of this came about a tablespoon of ghee and a large pinch of Celtic sea salt. Coupla tablespoons of rolled oats, and then the Master tapped me on the shoulder with a heady whiff of duck fat — so a tablespoon of that went in and got mixed with the nuts and oats.

Ladled the pear filling into the lovely, cold crust Sue had waiting in the refrigerator, patted it down solidly, and poured the pecan mixture on top. Into a 400˚ oven for ten minutes, then down to 350 for another twenty-five minutes. We exercised the restraint to let it settle for thirty minutes, then each of us had an eighth. And then another eighth.

In reflection, if I were to make this, or something like it again, I’d be tempted to just mix the filling and topping all together before filling the crust. I think the topping would enjoy the company.

I rarely make or eat dessert. When I do, it’s usually one that sounds stunning on a menu at the end of a memorable meal. I’ve been blessed to indulge in some amazing desserts over a lifetime, and I have to say, this one elbowed its way to one of the top five. No, make that number one. Not only was it fabulous, it was subtle and perfect for me and the way I eat in that moment. Not least, it was a gift from the Love of my life!

If you feel like giving it a try, and aren’t already stuffed to the gills, it feeds four little piggies, or two twice. 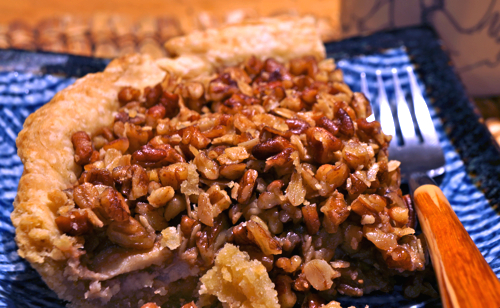