A Chronology of Trauma, from Creation to Completion
— without Conventional Medicine

[This series intentionally contains a lot of detail included for the benefit of health care providers and for those who have experienced similar injuries (or may in the future), but consider Western treatment their only viable option. One of the primary goals is to provide contrast to Western standard-of-care, and consideration of vital aspects of care and recovery either totally unrecognized or inadequately addressed in allopathic medicine.

In the first week following this injury, everything was just too raw to consider needling modalities. Although keenly aware that muscles from the palm of my hand, forearm, and shoulder girdle were in spasm — locked in severe trauma — I knew that now was not yet the time for trigger point injections or prolotherapy. Those would come later, when my body could actually accept such help and heal from it. I wasn’t even ready for acupuncture.

In the days before seminar, Chinese herbal medicine was the only modality I used — aside from one session with tuning forks, which brought to the surface an astounding amount of blood stasis which had previously been compartmentalized somewhere.

I would like to say that luxurious amounts of rest were included as well. But they were not. In fact, I would say that lack of adequate rest remains an important reason this injury is not yet completely healed. If I had had the rest I normally get in times of turmoil, I believe complete resolution would be mine — but I have not. Although I’m negotiating them very differently now, outer demands on my physical life have not changed. I can only now afford the luxury of a very occasional ‘sleep-in’.

Those of you who read Robert Ludlum’s Bourne Trilogy know the books were far more complex than the films, with a strikingly different evolution. And as Jason Bourne aged, still relentlessly pursued by his adversaries, he was often reminded of a repeated admonishment from his mentor (Conklin): “Sleep is a weapon.” This is a wisdom essentially unknown in our culture, but that has no bearing on its truth. Sleep is a powerful weapon — in healing, in athletics, and in maintaining a resilient state of health in all bodies.

At the conclusion of the Master’s seminar, a fellow student came up to me and asked if I’d like a ‘mini-treatment’. JoAnne Altrichter is a remarkable practitioner of a little-known discipline called Core Synchronism, and it just so happened that she was at the top of my list to begin unwinding the knot of trauma my body was experiencing. I gratefully accepted her offer, and felt a noticeable improvement in the ten or fifteen minutes she spent with me there in the ballroom.

Core Synchronism represents a major evolutionary jump from craniosacral therapy. It extends to all parts of the body and head. Just as craniosacral therapy perceives a movement of cerebrospinal fluid up and down the spine, Core Synchronism recognizes and corrects patterns of movement throughout the body. This is very subtle work. So subtle that even some of it’s practitioners think they’re doing psychic work. The movement we’re discussing here is actually physical movement at a level many people cannot perceive — but it’s a physical modality, not a psychic practice. This is an important distinction for those who understand the implications of psychic healing, but that’s an entirely different conversation.

JoAnne quickly realized the mini-sessions were inadequate for the task. At our first one hour session, she spent half that time getting my body ready to accept what she needed to do with the arm. Even now, we are both amazed at the degree of ‘confusion’ residing in my left shoulder. I now strongly suspect that confusion was present prior to the injury, and was exacerbated by it.

After seminar I went to X-Ray Associates and had the three typical views of my wrist x-rayed. The radiologist elaborated on my general impression: perhaps a third of the radial head had splintered off radially with a displacement of several millimeters. The small bones of the hand appeared to be intact and in place. But they sure didn’t feel that way.

It was this concern that made me decide to make an appointment at Albuquerque’s most respected orthopedic group. I called and specifically asked for an appointment with a particular orthopedist. Funny thing happened. As soon as I disclosed that I had no insurance, I was routed to an underling, ‘so I could get in fast and be taken care of’. Hmmm. I was to see him later in the week.

In the meantime, Rob Skoog graciously responded to a group email I sent to a number of colleagues. Rob is a D.O.M. with considerable emergency experience. His wife, Emily Kane, is a captain on the Albuquerque Fire Department and a paramedic, as well. Rob’s answer was the one I was looking for: If displacement is only a few millimeters, there are better options than conventional treatment. I suspected this was true, but I had no experience with the details. Rob reported having 100% success treating fractures on his martial arts clients using Chinese herbal medicine plasters made by Wei Labs in California. Wei had approached me years ago, but I had no need for their products at the time.

To make a long story short, I cancelled my appointment with the ‘orhtopod’, bought a brace to gently immobilize the wrist, got a ’starter patch’ from Rob, and ordered several more herbal patches from Wei Labs. My wrist definitely appreciated the support from the brace.

Throughout this period my oral supplementation has included:

Short Excursion into the Present

Jump now to ‘real’ time (there’s an oxymoron): the evening of day 47 (5th of November). I awoke early this morning in time to feed the atma its shabda breakfast at the usual time, and then I went back to sleep and slept till 10:25. What luxury! And because it was snowing and extremely windy outside, the censor felt comfortable just relaxing all day.

Yesterday, I worked without the support of the brace I decided I’ve been wearing long enough. I’m putting cedar shingles on our house and separate two-car garage. (Do you know how small shingles are? Do you know how long it takes one person to cover an entire house and garage with these small shingles — and take the time to do an excellent job? Neither do I, but I’ve been doing it long enough to know that the answer is going to appall me.) Anyway, the wrist and I became clear: the bone is fine, but the wrist has been in captivity far too long. It’s atrophied, and range of motion sucks because of soft tissue damage which has not been resolved. It’s time to move! Incarceration produces stagnation of qi, and stagnant qi is a painful, unhealthy thing.

So, having worked without the brace all day, I developed a good perspective of what needed attention. Trigger points in the thenar eminence were raising their ugly heads and making lots of noise. There are more tiny muscles here than you might imagine, and, as I discovered tonight, there are many more trigger points than I imagined. Fairly late this evening, I decided it was time to put these puppies out of their misery. I’ve come to accept that I’m really the best person for the job to inject trigger points I can reach. I know precisely where the pain is and where the trigger point is. And because I am the ‘patient’, I have the luxury of taking as much time as needed to palpate and understand exactly where I need to go and where the needle must enter.

This is especially important in light of the drawbacks of doing the injections myself. First and foremost, I have the use of only one hand. I don’t have the luxury of a second hand to spread the skin tight, to move that vein out of the way, to hold a muscle or tendon in place while I insert the needle. No, I have to know exactly where I’m going and how I’m going to get there through visual focus, based on prior, extensive palpation, because my second hand is lying helpless on my lap, sweating profusely. I must palpate with my right hand, and when I’ve locked onto the target and the pathway, let go of the target, pick up the syringe, uncap the needle and go precisely where my gaze is riveted. 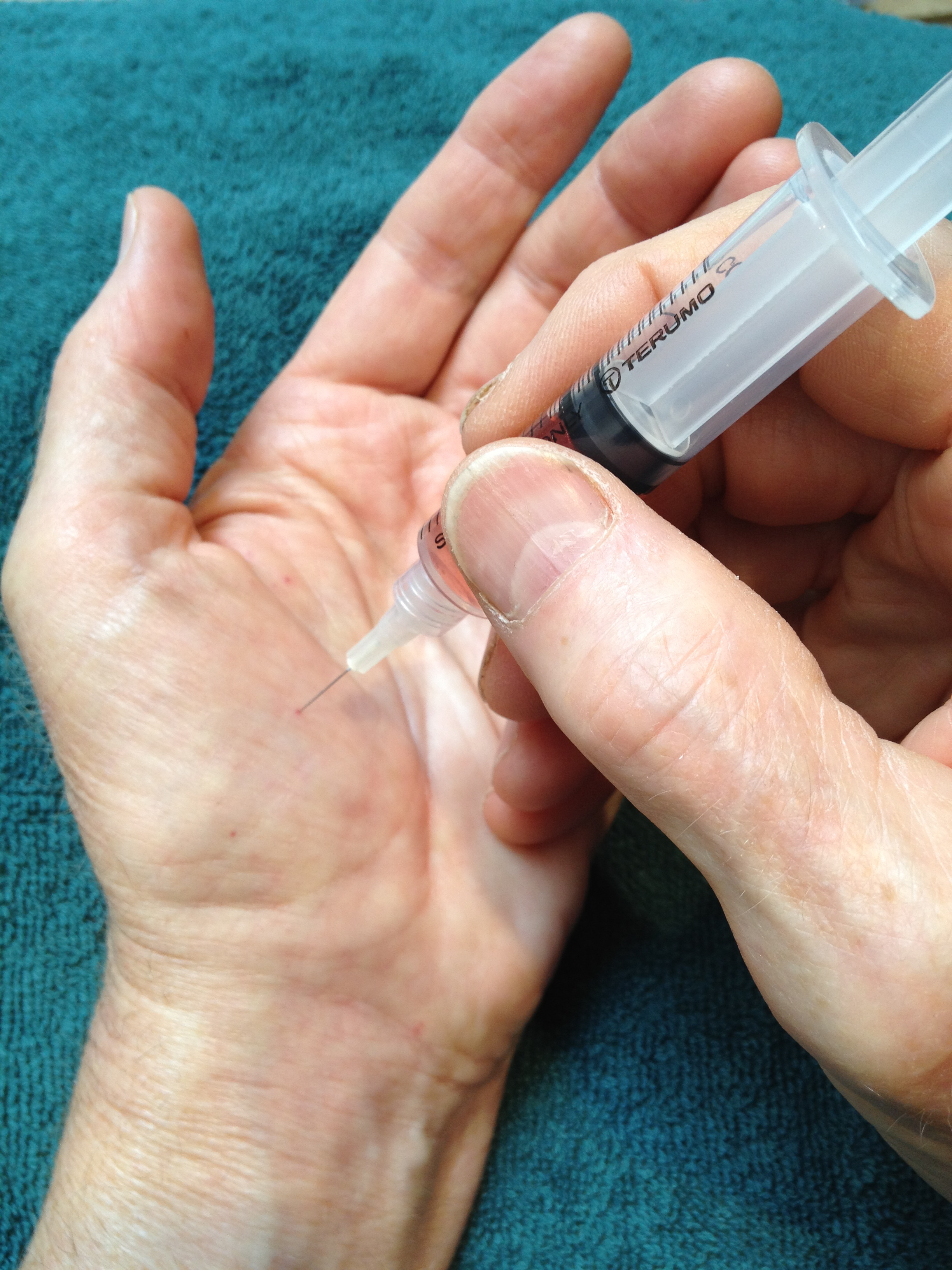 The second handicap inherent in doing one’s own injections is that my fear-ridden, wienie ego stands between my desire to accomplish the task and insertion of the needle. Fortunately, I have lots of help.

After having loaded a twelve milliliter syringe and put my usual 2” 25 gauge needle on the syringe, I realized my mistake: when that kind of precision is required, my hand and thumb are nowhere near the plunger on a syringe that big when I’m finding the trigger point. And getting there is not graceful. So while I decanted some of the syringe’s contents into a smaller syringe, Sue amusingly announced there was whiskey in the house. Would I like an Irish coffee?

Ha! That’s just what I need. We fix these maybe once or twice a year, and it was certainly the right night for it. Sure, make me a small one, please. As I arranged myself and my equipment on the couch, Sue brought my Irish coffee. Oboy, here we go. She and Scampi then retired to her room so they wouldn’t have to watch.

Upon opening the blister pack of a smaller needle, I discovered that it was not the 1.25” 27 gauge I assumed it was. It was a half inch 30 gauge! (That’s a very tiny needle. Would I even be able to reach the targets?) Well, this should be interesting. At least it brings the plunger closer to my thumb when the time comes. I took a sip of my Irish whiskey and began palpating the thenar eminence. To my surprise, I found a straight line strand of muscle running across the ‘fish belly’, as the Chinese call it, in a direction I didn’t know muscles even ran in this neighborhood. The strand was perhaps a sixteenth of an inch thick, but was extremely painful and referred into the head of the radius. Not helpful. In spite of my whining ego, I managed to nail it on the first try. Little fanfare, but huge release. Hmmm. This is encouraging.

An hour later all twelve milliliters of injectant were in my hand. It was a remarkable, rewarding, and enlightening session. And the Irish coffee was PERFECT! An epsom salt bath provided the perfect followup. With the entire left limb submerged from shoulder girdle to fingertips, my hand came alive in the super-hot water, stretching and s-t-r-r-r-e-t-c-h-ing, waving around and doing water aerobics like a dolphin. Range of motion was great.

I think I’m going to sleep really well. Omigod, look what time it is! Good night.