A Chronology of Trauma, from Creation to Completion
— without Conventional Medicine

[This series intentionally contains a lot of detail, included for the benefit of health care providers and for those who have experienced similar injuries (or may in the future), but consider Western treatment their only viable option. One of the primary goals is to provide contrast to Western standard-of-care, and consideration of vital aspects of care and recovery either totally unrecognized or inadequately addressed in allopathic medicine.]

Doctors of Oriental medicine in the West often concede that Western medicine’s strength is in emergency or acute trauma situations. In the very long time since my last post here, I’ve gained first-hand insights into this perspective. For those of you who dismiss Oriental medicine in trauma situations, I’d like to enrich the conversation with my personal experience and the greater depth of understanding it’s brought to my practice of this most remarkable medical system.

One of the reasons for my long absence from Contemplations has been a demanding schedule of construction projects, which has not yet abated. Many in the ‘human potential movement’ proclaim that a goal is a ‘dream with a deadline’. And they clearly think this is a clever and productive approach. The Masters throughout time, whose goal (sans deadline) is the awakening of soul rather than the development of mind, know that creation on the physical plane works a little differently than that. And I’m coming to see with greater clarity that deadlines, as used and understood in our culture, tend to create imbalance more often than not — whether or not they result in ‘accomplishment’.

What does this have to do with trauma medicine? Well, everything. Where does trauma come from? We are the creators. If there is trauma in our lives, we have created it. The degree of trauma is roughly proportional to the lack of awareness we’ve brought to the creation — especially when one has invited the Sat Guru in to oversee and guide one’s unfoldment. In Oriental medicine, balance is the primary objective in obtaining/maintaining good health — imbalance inevitably manifests in disease, injury, poor health.

But this is something we don’t consider in the West. We don’t acknowledge that we set ourselves up for a traumatic experience. “But that guy hit me — I was just sitting there!” If we’re emotionally honest, if we look deeply, imbalance is always present with an ‘accident’ — no matter how subtle. It must be present; it’s a universal law.

My own experience lacked any degree of subtlety in illustrating this principle.

Replacement of our metal roof was one of my construction projects. In an effort to save money, I decided to remove the old roof and gutters myself (from both house and garage, with several skylights and over a hundred ‘ice blocks’ to keep a snow load from ripping the gutters off). I was doing this alone. Of course, it was taking longer than anticipated. The roofers were scheduled to arrive Tuesday morning to put the new roof on — a two day job. Monday had arrived, and the prognosis was not good. Was imbalance present? You bet. I was feeling the pressure of the deadline. I was more than a little tired. Was my attention lovingly on the Sat Guru? Increasingly not. 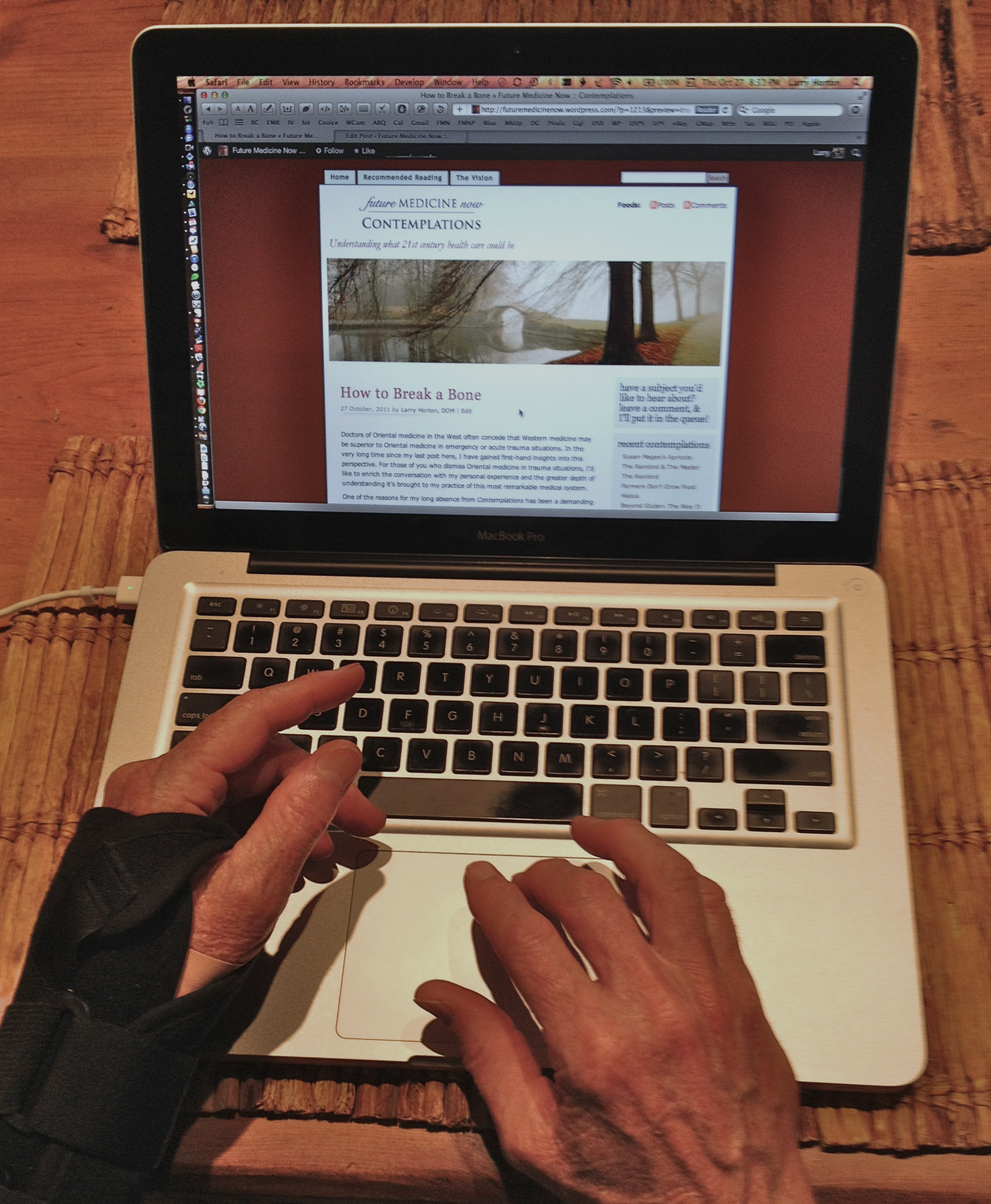 Oversize, one-piece steel gutters collect rain from our roofs to feed into our rain water storage. These are expensive gutters with a colored polyurethane coating on the outside. For years, in order to avoid marring the gutters, I have resisted leaning a ladder against them when getting on the roof for a project. Instead I would place a folded ladder on the deck at the roof’s lowest point and make the move onto the roof from the very top of the ladder. This is something few people are comfortable doing, and when it’s wet, it’s definitely dicey.
You can see where this is heading.

During this project I was up and down the ladder perhaps a dozen times a day. As Monday wore on, my center was completely lost. I was definitely in a hurry. The transition to and from the roof and ladder had become a cavalier leap between the two. The first time I fell, I was also angry. I inattentively tipped the ladder when I put my foot on it and fell eight feet to the deck — straight down, landing on my feet. It was quite a jolt, and it didn’t do my left ankle any favors. Oriental medicine recognizes that a blow like this is hard on the kidney system and adrenals which rule the bones, the knees, and the ankles, among other things. The Master and I recognize such an event as a wake up call. Soul is asleep, and mind/ego have recklessly taken the lead. Time to wake up.

Was I listening? Did I take the call? Did I stop, pause, check in with the Master, and keep Him close? “No, dammit! I have a #@%*ing deadline!!” And within two hours, I received another call — this one better designed to retrieve my wayward attention. Exactly the same conditions of my own creation: tired, uncentered, hurrying, and angry. This time my legs caught on the ladder. My left wrist was the first part of my body to perpendicularly encounter the deck, straight down, with my body weight behind it — almost classic Colles fracture. It hurt like hell. Amusingly, all this happened at Sue’s feet as she was walking up to the ladder.

So, writhing around on the deck, I evaluated other parts of my body after I could breathe again, and as I waited for the pain in my wrist to subside. Clearly the wrist was the main event. But it wasn’t misshapen, and I wasn’t bleeding (externally). I could still function — with my right hand. Within fifteen minutes I was back on the roof, and while the Master now had my attention, I was still exhausted and now injured — with much of the project remaining.

Fortunately, Sue decided it was time for her to join the fray. I had purposely avoided having her on the roof for this project. She hates heights, and her balance can be, shall we say, quirky. I should quickly qualify that I’m referring to her external balance — her internal balance is far more agile than mine.

But she got on the roof and dove in with a vengeance. Before it was totally dark, she, mostly, had ripped off the remaining few pieces of metal solidly attached to the skylights. The strength and determination she unleashed were literally awesome. It was a side of her I’ve never before witnessed, and it inspired even deeper respect for this remarkable soul. Thanks to Sue, we were ready for the arrival of the roofers in the morning. We were exhausted, and one of us had a broken wrist, but the deadline had been met. 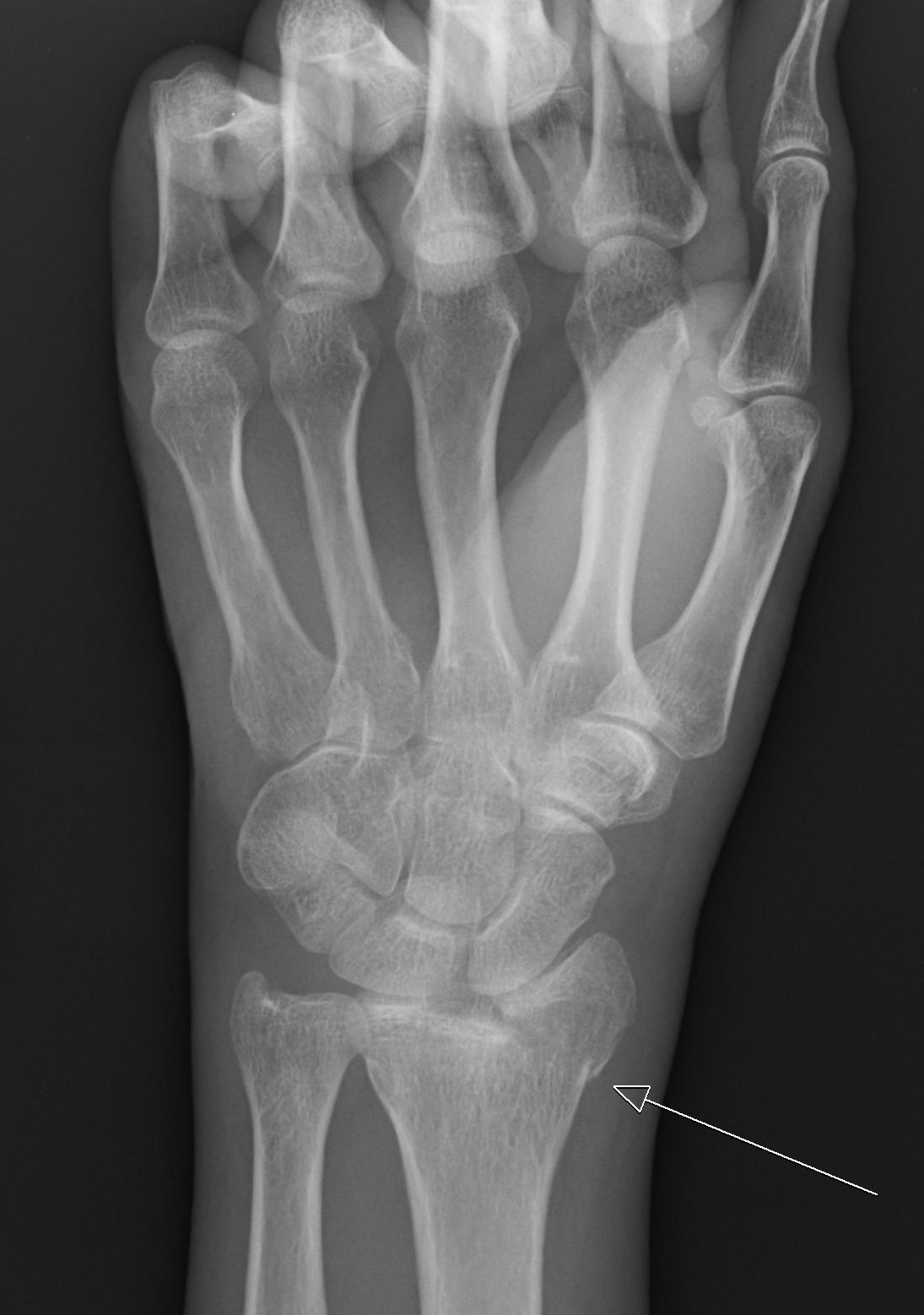 So, there we have it — how to break a bone — with all the typical requirements in place. Could it have been worse? Are you kidding?! It could have been quite serious. The Master does His job with love and precision. He got my attention. He left me with the use of my right hand. He compressed time and space by teaching me valuable lessons we often take lifetimes to catch. And, He let me meet my precious deadline. Now I get to learn things I otherwise would not — about my own body (all of them), and about the medicine I love sharing with others.

In following posts, I think there would be value in sharing with you…

I’m milking this experience for all it’s worth — to me and to you. Come along for the ride, if you like!