On the night of July 10th, an uncommon hush descended on the Manzanito neighborhood. I say descended because it was more of a profound, stilling pronouncement than simple quiet.

For a bedroom community in the backwoods of New Mexico’s Manzano mountains, I would characterize this neighborhood as a relatively noisy place. For the twenty-two years I’ve lived in these mountains, New Mexico wind has been a nearly constant presence. Chinese who live in this state attribute the relentless wind with responsibility for the state’s poverty. Wealth is simply blown away.

Barking dogs are enough of the norm in this neighborhood to preclude the precious silence one might anticipate in the relative solitude of rural settings of the West. Yet many neighbors here seem to assume that the absence of urban surroundings translates to freedom for their dogs to generate as much noise as undisciplined dogs tend to make. More often than not, the same neglected dogs bark almost incessantly each evening in raucous celebration of their perceived freedom and their own bored voices—usually until at least ten o’clock.

Coyotes, too, of course, engage in cycles of elaborate expressions of their wildness, running the gamut between beautiful and terrifying.

But shortly after summer solstice, just before New Moon, we and the neighborhood experienced something else. In my own memory of the time I’ve lived here, there has never been a night so completely filled with a conscious stillness. No wind, no dogs, no movement of any kind—all night long, and through the following early morning.

It was as if our entire world was suspended in respectful observation of the translation of a remarkable soul. And, in fact, Sue and I had buried Scampi in the fading light of that evening. He took a very large part of us with him. 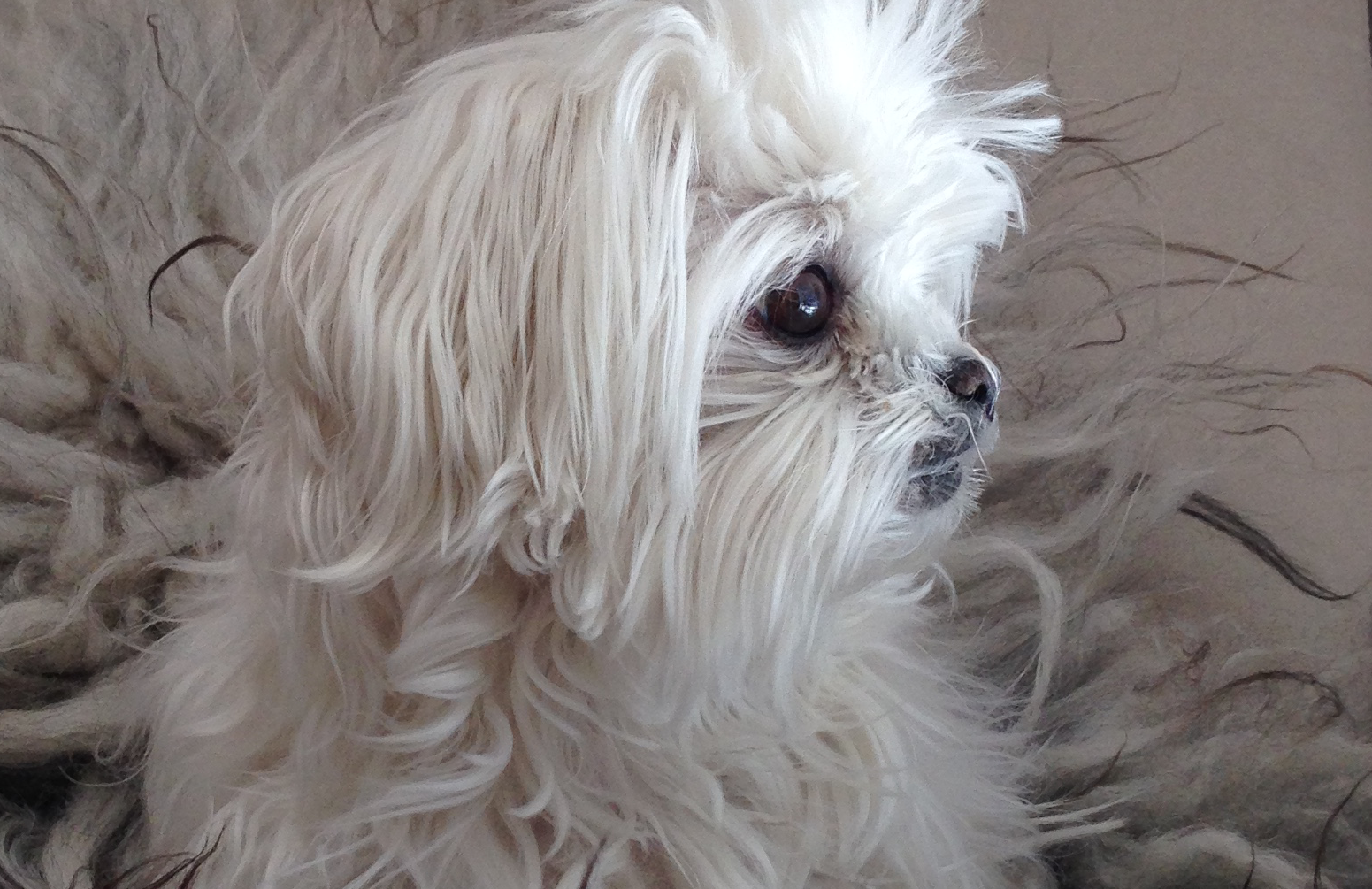 Oh, come on, Larry. You’re attributing this to a dog?

No, I’m attributing it to something much grander. And, yes, that was our experience, and it was unquestionable to us. And its truth is still revealing itself, more and more deeply. But Scampi’s indomitable spirit was always in evidence, and despite the pain and suffering he endured in the last few weeks in his wracked little body, that spirit radiated more brightly than ever, even up until his final moments. This is a soul for whom I have enormous love and respect—far beyond my own understanding.

When Sue joined Future Medicine Now, the love of her life became our clinic dog. I swear there were clients who came for treatment, when their true motivation was to see Scampi. He was endlessly happy when anyone came through the door and did his substantial best to make them smile and laugh. And many of these clients benefited from simply having Scampi quietly snuggled next to them on the treatment table. A friend once implied that his behavior was selfless. That’s simply not the case. But I do know what made life worthwhile for him, and increasingly, I appreciate the beauty in that. 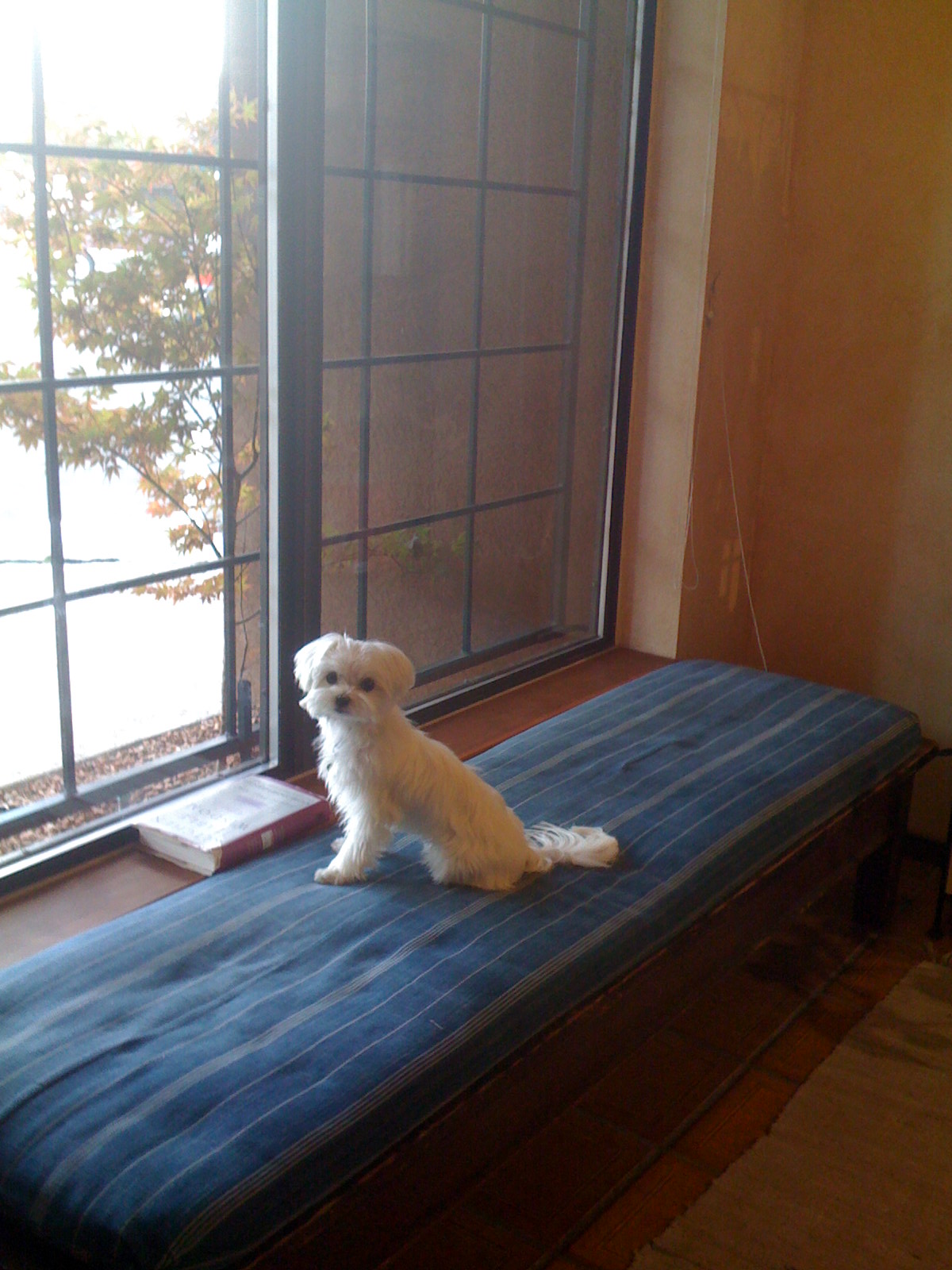 To Scampi, any person coming through the door was worthy of unrestrained delight, expressed in ways both genuine and wondrous. And when the someone coming through the door made it clear they had no use for such foolishness, Scampi quietly disappeared—something at which he was equally adept. He got their message very quickly—and quietly waited for another opportunity. I’m reminded of the Master postulating to us whether the sun wonders if people will enjoy its warmth and brilliance. No, of course. Like soul itself, it simply shines because that’s its delirious nature. And most people love it. But the sun doesn’t despair over those who don’t.

He did his job well. And doing it seemed to be its own reward.

But Sue left the clinic, and where Sue went, Scampi went. They were inseparable. He was now left to fully experience his karma with us—and we, ours with him. 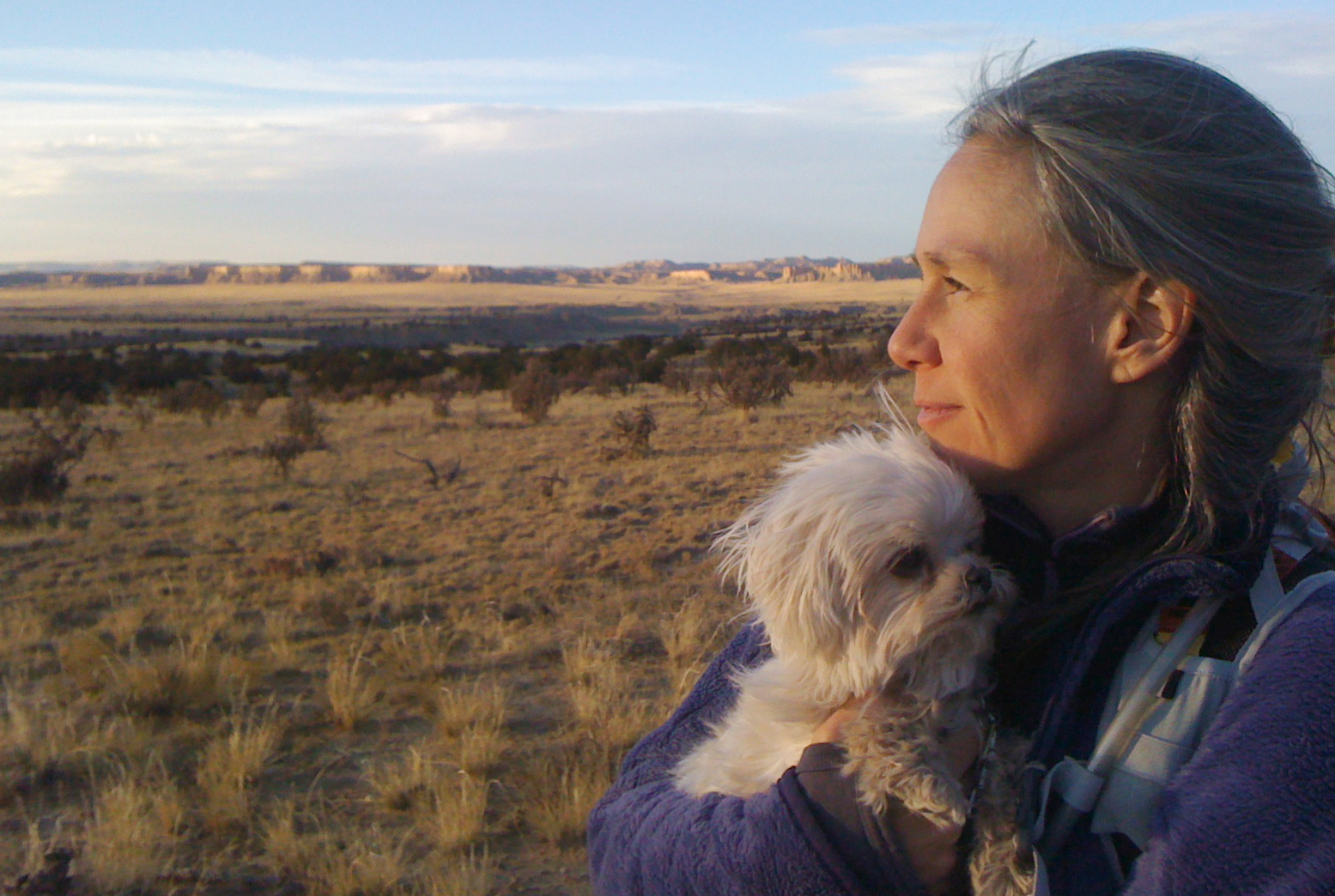 When we discovered he had a terminal heart condition, life changed for all of us. Then, finding within a couple of weeks that Western veterinary medicine wasn’t going to cut the grade for his care, Sue and I embarked on a full tilt effort to bring the best of Chinese medicine to his life. As you may know from reading this online journal, Chinese medicine’s viewpoint is looking in the opposite direction of Western medicine’s focus. Western medicine is obsessed with saving lives. Chinese medicine is utterly devoted to providing the highest quality of life—called ‘health’—for the time we’re here. That’s been the character and guiding principle of each of these paradigms since their respective inceptions—thousands of years apart.

Perhaps those sound like the same objectives, but, in fact, in spirit, and in practice, they are diametrically opposed.

A Western cardiologist gave Scampi six months to live, and the effects we saw of what would be used to accomplish that were simply unacceptable to us. We brought him home and dove headlong into giving him the love and best that Chinese medicine had to offer in fulfilling its promise.

This choice had enormous cost, especially to Sue and her own health. Scampi’s herbal regimen was rigorous, and staying on top of changes to his condition and his formulas demanded that we plunge into the depths and heights of the medicine as never before. Doses had to be administered every hour or two. One formula, which was required for the entire duration of his remaining time, was to cope with ascites, which meant peeing several times per night. It all played hell with Sue’s sleep requirements. Doing that and so much more, continually for two and a half years, has taken a toll from which she may never fully recover.

Feeding Scampi was a whole book in itself.

Why were we so attached to making this sacrifice for him? Once again, his indomitable spirit is why. Neither of us regrets a thing. Scampi became the embodiment of the Comeback Kid. He made such regular recoveries, shifts, and reinventions of himself, that being in awe of his essence was unavoidable. And there were many moments, when we could clearly see that the quality of the medicine and the love he was receiving had such a potent effect that he radiated it, regardless of the progression of physical organs approaching failure.

When I finally closed Future Medicine Now, and Sue was working two days a week in town, Scampi was left at home alone with Larry, enduring the moments until Sue’s return. As Sue liked to say, the rubber band between them was both short and very strong. With his body failing him, the ache he felt for her when she was gone deepened.

Our relationship was very different. While he couldn’t bear to be without her, he was—I think fascinated may be the most appropriate description—with me. In the beginning of this recognition, I thought he was simply fascinated with the things I did. ‘Boy things’. And he was. But, happily, I believe, he became truly fascinated with me—and I with him. And that’s a different form of love.

The treatment he received from us really did keep his heart strong. But the signals 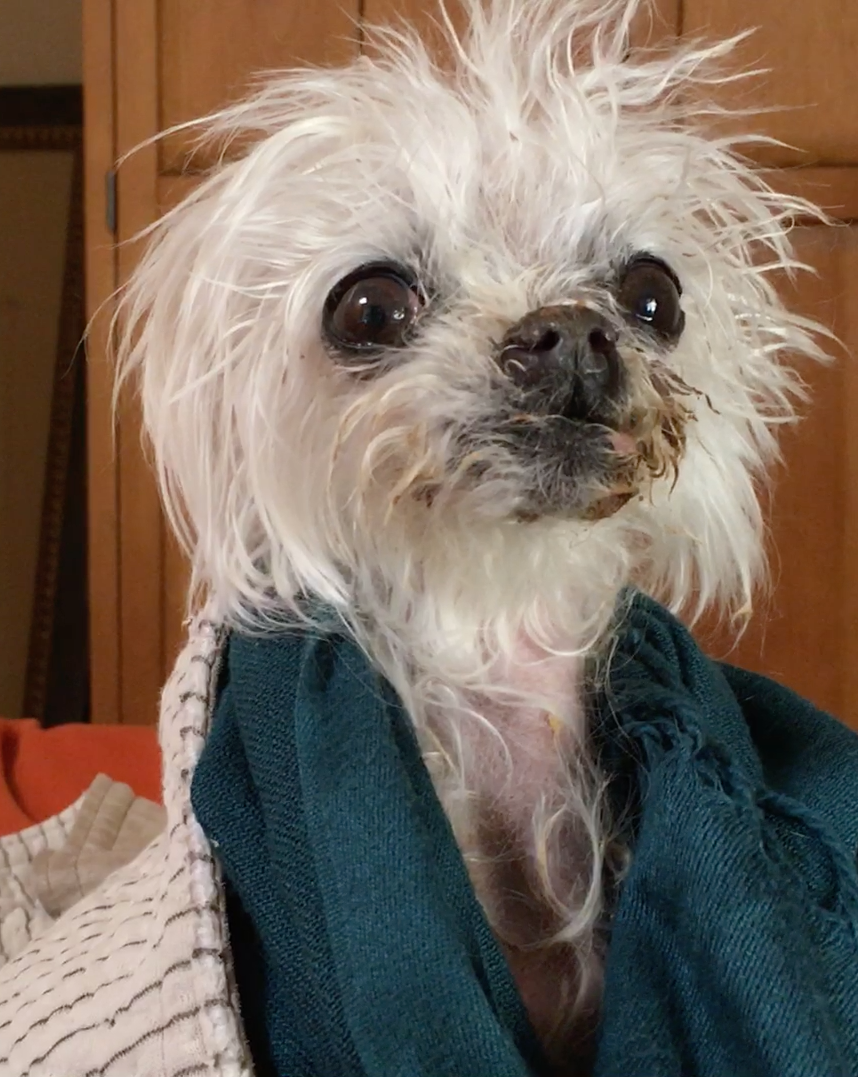 guiding it were so confused that it was almost unimaginable that it lasted as long as it did. The condition affected his lungs, his kidneys, and the loss of muscle mass must have been very uncomfortable for him. In his last few weeks, he had lost most of the hair on the underside of his body. He was literally skin, bones, and enormous belly. Even in that condition, he managed to appear beautiful to us.

Throughout this whole period, we experienced many times when we thought we were losing him. But always he recovered, sometimes so dramatically we could hardly believe our eyes.

The morning of my last day with Scampi, the weather had been hot. After Sue left for town, and we closed the gate, he expressed a choice of staying outside, so I got a chair, and we sat in the cool shade of an oak copse. He so loved being outside. For weeks, I had given up trying to ‘get much accomplished’ when I was home alone with him. But that day, he wasn’t comfortable at all. It looked as if it could be a rough day. He was clearly having inner experiences that were discomforting, but his tongue was still bright pink. We finally went inside, and I eventually decided to call Sue. She had run home previously at times when I thought this might be it, so I hesitated. Fortunately, without making any decision, she jumped in the car and raced home.

By the time she arrived, Scampi was not only displaying unusual discomfort, but fear, as well. Acupuncture had pretty dramatic effects for him, but now didn’t seem like the time. Sue suggested we put him in the empty aquarium we used to administer oxygen to him. I put him in, but immediately recognized the mistake. Now was not the time for heroic, Western-style efforts. Now was the time to bring to bear all the love, courage, and divine presence we could muster for the most important remaining moment in our little friend’s life. Sue sat with Scampi at her side in their favorite chair, and I squeezed in at their feet, facing them both. Scampi was sitting upright, Sue cradling his rear end with her hands, my eyes locked with Scampi’s. He was scared, but the love and the Master’s presence flowing through allowed him to use it to be brave, and brave he was. Provisional trust outcreated fear. He never looked away as I lightly held his frail little shoulders—until the moment his inner oxygen was suddenly turned off, and he was gone in a matter of seconds. Eyes still open, he was no longer seeing me. And he had waited for the presence of his beloved mom.

We sat there, holding his body for some time with the memory of him and the power of what had just orchestrated his translation, and feeling deeply that love. We bathed and groomed his little body, which was no longer tormented by the karma enlivened by his presence. Amazingly, he was as beautiful to us in death as he was in life, eyes still open and nearly as bright as when illuminated by his precious soul, now free at last.

Second only to his unquenchable desire and uncanny ability to make people laugh, was Scampi’s desire for a human incarnation. There were times when it was especially evident, and I would sometimes admonish him to be careful what he wished for. But he surely experienced the Shabda, and he certainly liked that. While he couldn’t have given it a name, I know with certainty that he could discern the Master’s presence when it was strong, in contrast to times it wasn’t. When we gazed into each other’s eyes, and I told him how much he was loved, his whole demeanor would melt into the essence of the words. Not quite able to grasp, he nonetheless drank deeply.

The image of Scampi that remains with me is much, much larger than life. Being the runt of a litter of show dogs, the only thing small about him was his diminutive body. I don’t know if the soul of Scampi and I will cross paths again, but I do know we left an indelible imprint on each other. I’m so glad we did. The Master taught me so much, through him, his life, his death. 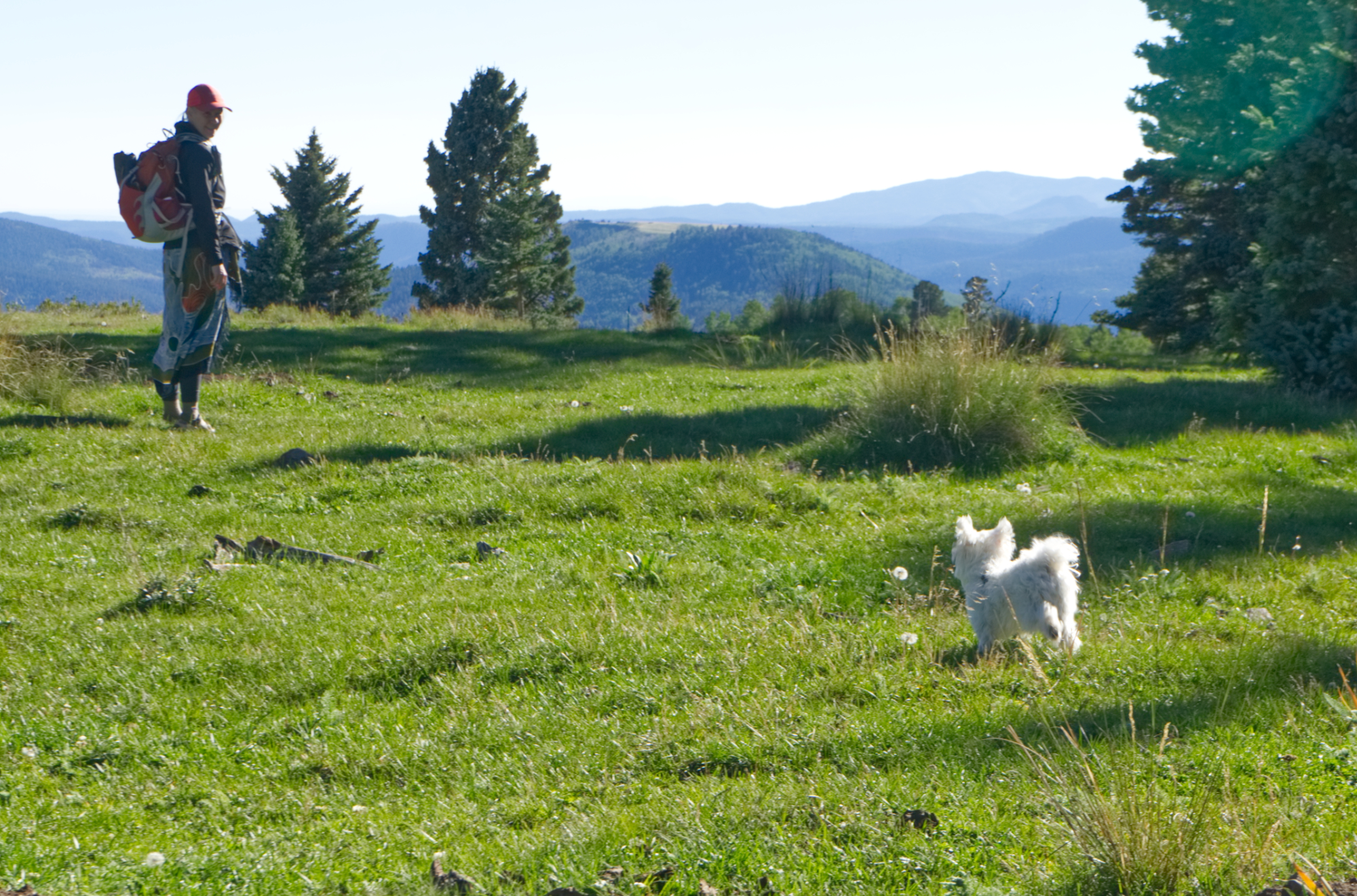